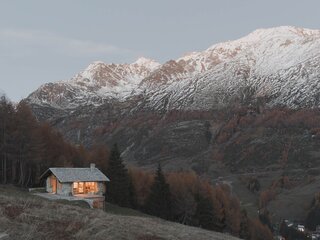 The owners of this hut, busy city-dwellers from London, were looking for somewhere to spend weekends immersed in nature. This property was easily accessible by car in summer, and by snowmobile in winter, making it a perfect escape. The existing building consisted of a stone and wood envelope with an internal slab of exposed concrete. Thick planks of fixed wood shut it off from freezing winds, but also from the breathtaking Alpine views. It was poised for reinvention.

Italian architects Luconi Architetti Associati worked the fine line between renovation and preservation, opening the home to its view while retaining its structure and personality. The team replaced the old wooden cladding with abundant glass, but also created a system of doors that could seal off the entire home and protect it from wintry weather.

“The building has taken on two guises,” says principal architect Piero Luconi, “one more traditional and mimetic during periods of inactivity, the other more suited to contemporary residential use.”

To fit three bedrooms into the new plan without impacting the essential look of the home, the team built an inconspicuous lower level annex tight to the slope.

The upper level consists of a living and kitchen area with glass walls that open onto a new wooden terrace built on the sunny, south-facing side of the home, just above the annex. A frameless glass fence encloses the deck without blocking views of the panorama from the interior.

The peaceful interior reflects the team’s preference for “calm tones” and creates a relaxing environment that allows the view through the windows to take center stage. The clients describe their style as “simple, precise, and rigorous,” which is consistent with Luconi’s preference for “subtraction rather than addition.”

In such a minimalist setting, details stands out. “The team paid great attention to the choice of materials,” says Luconi. Throughout, they used heat-treated oak wood with a rough, brushed finish, while the natural split stone used for the floors and featured in the shower comes from Swiss quarries not far from the hut.

Except for the Hay sofa in the living area, all of the furnishings—mostly built-ins—were created especially for the project.

While nothing competes with the glass-framed scenery, the ribbed, wooden ceiling above the kitchen provides plenty of visual interest in the living area. The team came up with the design as a solution to practical issues. “We needed to insulate the existing ceiling from the inside,” says Luconi. The wooden shingle ceiling not only hides insulation but subtly integrates the room’s lighting system.

The new lower level, tucked against the side of the mountain, includes more intimate spaces with smaller windows for the bedrooms and private baths.  The lighting is more moody and gentle, relying on shafts of natural light from small openings and a lighting system mostly contained within the walls of the new slabs.

The owners enjoy relying on natural light, both upstairs and down, which allows them to appreciate the “multiple and immediate” changes in the landscape as weather patterns shift above the mountains.

As they did in the upstairs living spaces, the team built simple furniture directly into the lower level rooms.

And what about getting through a brutal winter in the Alps? According to the clients, the home is well prepared for the elements thanks to Luconi’s ingenious arrangement of exterior doors. Luconi calls it “a heating system with remote control.”

Simple Lifestyle Changes That Will Make Your Health ‘10 Times Better’

Ask A Dentist About Tips For A Beautiful Smile

Splurge or Save Small Outdoor Accessories

A Fragrance Guru’s Guide to Creating a Home That Looks, Feels, and Smells Good

This Revamped Seattle Midcentury Is a "Riff on the Original Melody"

How Much of a Home Is ‘Harry’s House’?