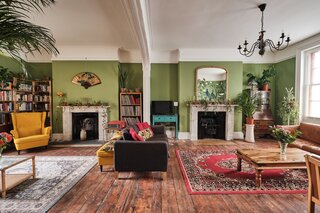 From the agent: “Gordon House is a remarkably characterful Grade II-listed home located on the fringe of Margate’s center, just minutes from the Main Sands and the railway station. Originally built in the 1790s as a Georgian family home, Gordon House’s 4,903 square feet now feature six bedrooms, four bathrooms, a gallery space, and studios across its five thoughtfully renovated floors. Many of the original architectural features have been revealed and preserved, and later Victorian cosmetic additions saved, including marble fire surrounds, internal archways and doors, sash windows, and wooden floorboards. The home was once part of the Ancient Parish of St. John the Baptist—which dates back to the 1500s—and had links with the nearby Grade I-listed Parish Church. This exciting abode is currently owned by Lucy Lyons, an artist who uses the house as a place to create and share with other artists and makers.”

The 14 best Star Wars games ever

Injured On The Job? A Few Essential Tips For What You Should Do Next

These Portable, Modern Fire Pits Are This Summer’s Hottest Accessory

After a 15-Year Renovation, an Architect Couple List Their Brooklyn Townhouse

Before & After: A Couple Give a Treasured Family Home a Fresh Start—Furniture and All