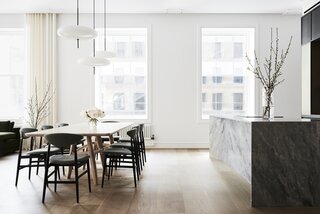 Inside, an uninspired full-floor apartment brimmed with potential, but was in need of a total redesign to fit the needs and lifestyle of the home’s current residents. The creative couple—a violinist and an entrepreneur—were eager to embrace the loft’s historic charms, but craved an improved layout that would accommodate many activities at once–like salon music recitals, entertaining, and working from home.

The couple tapped Brooklyn-based architecture firm Worrell Yeung for the renovation, and their first strategy was to remove walls and obstructions from the apartment’s perimeter. Freeing the perimeter would usher in light from the 14 double-hung windows that flanked the space, allowing the loft to feel more open, functional, and flexible. The original windows, which had been painted black and in poor condition, were replaced in kind and painted white to provide more cohesion.

The Worrell Yeung team looked for ways to embrace the building’s unique geometry in their loft redesign. “The building itself is triangular shaped, so we worked hard to find a layout that mitigated these different geometries, while also subtly highlighting the differences,” says architect Max Worrell.

The architects turned to Madera for large-format white oak flooring as the benchmark for their material decisions and to enhance their overall design approach. With different hues and tones integrated throughout the home, it was critical that the wood selection blended in harmoniously, without competing.

“We knew that we wanted a really neutral, soft floor that wouldn’t dominate visually, but complement the other material selections in the space,” explains Worrell.

The Worrell Yeung team experimented with several layouts in the floor installation, ultimately choosing to lay the floors perpendicular to the city grid, which fronted the loft’s north facade.

“You get these really interesting moments at the entry and den where the geometries reconcile themselves,” says Worrell of the effect.

Amongst an elegant collage of marble, brass, and plaster, timber is central to the loft’s interior design, with wood surfaces featured prominently in the kitchen, den, and bedroom. “Wood is perhaps the most important for this particular project,” says Worrell of the material palette.

“Particularly for projects within historic structures, we like working from a library of classic, timeless materials to create something that is decidedly modern and new,” says Worrell. “These floors do that.”

13 Reasons Why You're Always Hungry And Solutions

The Self-Taught Architect Who Became the “Modern Maverick of Malibu”