Valve’s Steam Deck is well and truly released at this point—you can go buy one right now from Valve if you want. The AMD processor that powers it, code-named Van Gogh, has proven to be much more potent than many people expected, owing to many factors including intelligent power management and a smart balance of resources on the chip.

As far back as two years ago, we also heard about a chip code-named Mero. By all accounts, Mero would be targeted at a similar space in the market compared to Van Gogh; well-known leaker Komachi even went so far as to imply that they were the same thing. Locuza, another Twitter personality best known for his detailed die diagrams, noted that Van Gogh has many logic blocks, such as for computer vision acceleration, that are not used in the Steam Deck. 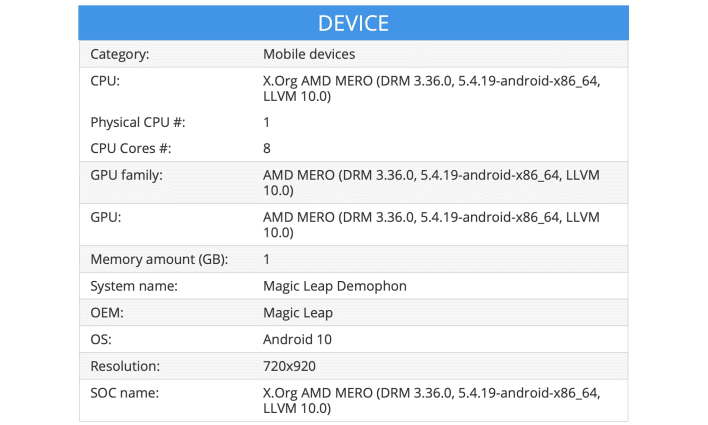 Well, Twitter user @_rogame spotted an entry (above) in the BaseMark database that seems to confirm the existence of AMD Mero and also a potential use case for it. The entry lists the processor as having eight cores, which in BaseMark parlance means “eight logical cores,” or a quad-core CPU with simultaneous multi-threading. The chip is described as being installed in a “Magic Leap Demophon,” equipped with 1GB of RAM and running Android 10.

Assuming that Mero and Van Gogh are essentially the same thing, we would be looking at a Zen 2 processor with four cores, LPDDR5 memory, and RDNA 2 graphics—just like the Steam Deck. Such a setup has proven quite powerful for gaming, but Magic Leap’s next-generation headset is said to be aimed strictly at the business market.

Indeed, after its disastrous launch of the Magic Leap One, the fledgling AR company laid off much of its staff and went quiet for some time. The tale, as it’s now told, is that Magic Leap will be releasing a second-generation AR headset, and it’s quite possible that it will be powered by an AMD Mero APU.