Right about a year ago, Apple announced the first Macs with its own home-grown processor technology, dubbed the M1. The first 13-inch MacBook Pro, MacBook Air, and Mac mini shipped with the company’s new wonder-chip, and even the base model $700 Mac mini knocked our socks off at the time. However, CPUs don’t stand still and in the intervening year, the company’s rivals have released newer processors while Apple was happy to merely add the M1 to new iMacs. That is, until this past Monday when the newly-designed 14-inch and 16-inch MacBook Pros became official.

Apple spent a considerable amount of time bragging about how fast its new M1 Pro and M1 Max processors are, but it’s hard to take any company’s marketing numbers seriously. Sometimes, performance claims can’t be fully appreciated when they’re just numbers on a slide in a keynote presentation. That’s why it’s good to see that M1 Max performance numbers have started to leak online. Over the last year, it seems Apple has made some serious strides with its latest processors, putting the lowly M1 to shame.

Poke around the Geekbench database for a while, and we’re starting to see results for a model named “MacBookPro18,2” which is apparently one of the new machines. This particular example is armed with the M1 Max chip, which has either a 24-core or 32-core GPU. What’s unfortunate is that Geekbench doesn’t know the difference between the two. However, the 24-core GPU is only available in custom orders, where the 16-inch model with an M1 Max has the 32-core GPU. For that reason, we are guessing this is the 32-core model (but don’t hold us to it).

Regardless, the M1 Max-equipped MacBook Pro posts some pretty impressive performance in the Geekbench Compute benchmark. Running with Apple’s low-level Metal API, it posted a score of 68,870.

That’s pretty fast, but not entirely unheard-of. We took some of our own Apple hardware as a point of comparison to see just how far Apple’s GPU technology had come. Of course we had to include our M1 Mac mini along with the iPhone 13 Pro that we recently reviewed. But more importantly, how do these scores hold up to PC hardware?

Well, we’ve got a couple laptops available as points of reference: The MSI GE76 Raider that we reviewed back in September, and a Lenovo ThinkPad X1 Extreme that will be reviewed soon. The MSI is big, heavy, and ridiculously fast—the GPU’s 125-watt TDP is nearly as high as the 140-Watt MacBook charger is capable of delivering to the whole system. Meanwhile the ThinkPad is a lightweight machine with an 11th-gen Tiger Lake Core i9 and a GeForce RTX 3060 mobile GPU, which is closer in size class to the 16-inch MacBook Pro. 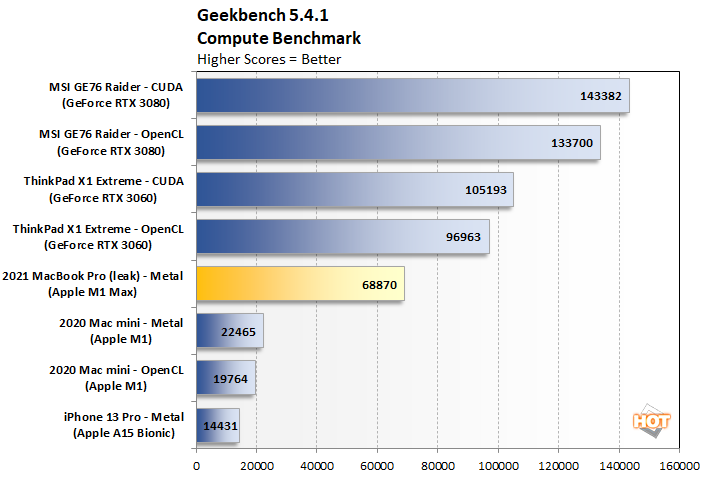 The end result was not particularly close, at either end of the spectrum. Starting with Apple versus itself comparison, the leaked M1 Max obliterated the previous generation M1, with scores we obtained ourselves on a 2020 Mac mini. Apple’s latest silicon, if the leaked score proves accurate, is more than three times faster in this benchmark.

However, when we turn our attention to Windows laptops, the end result was not closer either, though not in the M1 Max’s favor. The MSI GE76 Raider more than doubled up on the supposed MacBook Pro. The Vulkan test flat-out refused to use the discrete GPU and relied on the built-in UHD graphics of the Core i9-11980HK, posting sub-8,400 point scores with NVIDIA’s latest drivers installed. On the other hand, the ThinkPad X1 Extreme is probably a better comparison due to its lower size and weight, but even then it still gave Apple a hefty defeat.

Apple’s GPUs might be able to keep up with a GeForce RTX 3080 in GFXBench, but it seems that NVIDIA has the absolute performance upper-hand on the compute side.

It remains to be seen what the power draw on the revamped MacBooks end up being, and the big question is whether that was truly the top-end 32-core GPU in the leaked benchmark. Personally, I’m eager to get my hands on one of those MacBooks for myself, but Apple’s quoted ship dates are already slipping into late November. Meanwhile, enthusiasts who are looking for a speedy, thin 16-inch notebook would do well to hang on for our ThinkPad X1 Extreme review coming before too awful long.