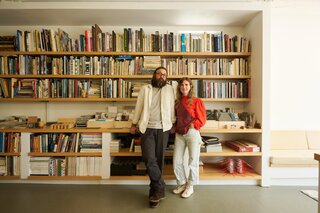 It’s easy to focus on the outdoors when visiting Asheville, North Carolina–the mountains are an inescapable part of the landscape and there’s no shortage of panoramic vistas, flowing waterfalls, and good old-fashioned mountain air in the area’s million-plus acres of protected wilderness.

But if you look a little closer, you’ll uncover a lively design scene that lies in the shadows of the Blue Ridge Mountains–and is endemic to the city’s eclectic character.

That’s the thing about Asheville–there’s a lot more than meets the eye for a city of only about 92,000 residents. It’s a place that seems to firmly exist between two worlds: One that’s rooted in the past with a deep history of Appalachian craftsmanship while the other embraces the more cutting-edge sensibilities of a modern city.

“I think it’s a place where the craft was actually part of the culture,” says Rob Maddox, who is one-half of the multidisciplinary design studio Shelter Collective alongside Karie Reinertson.

Maddox and Reinertson are two of the countless designers and artists who now call Asheville home, and have been “really privileged to be able to participate in the entrepreneurial spirit that this town has fostered,” Maddox says.

Whether walking in the River Arts District or visiting one of the city’s many locally-owned boutiques, you’ll notice a Southern hospitality throughline amongst the creative spirits with quips like “go see my friends at…” or “they’re doing amazing stuff at…”

When talking with Shelter Collective, a handful of local artisans’ names like Casey Johnson, Melissa Weiss, and Stefan Daiberl were tossed around with high regard.

“That’s something that I think Asheville has had a fair amount of historically speaking–that’s just part of the culture…that’s actually very supportive at large to all sorts of different kinds of crafts or design trade,” Reinertson says.

That level of regard lends itself towards the sharing of knowledge versus a more dog-eat-dog mindset, adds Maddox. (Both Maddox and Reinertson worked in other U.S. cities before meeting in Yestermorrow Design/Build School in Vermont, and eventually settling in Asheville 12 years ago to start their shop.)

“In places that are more competitive markets where people are trying to make their claim on something, there’s sometimes a bit more of a tendency to be standoffish or secretive about how things work because you’re trying to protect your market share or something like that,” says Maddox. “And I think in the craft world, there tends to be more of a sharing of knowledge and information because you’re keeping a thing alive. That’s part of a culture as opposed to it just being part of commerce.”

“Truly, you can just walk in any direction in Asheville and you’re going to find somebody’s studio and be able to purchase some of the crafts that they sell,” says Matisse.

Matisse is the co-founder and CEO of East Fork Pottery, a direct-to-consumer manufacturing company of about 125 people making must-have plates, bowls, mugs, and the like in the mountains of North Carolina.

Matisse, like Maddox and Reinertson, didn’t expect to end up in Asheville. She “wasn’t even aware of its existence” when she moved to nearby Madison County to work on a goat farm after working for urban agriculture nonprofits in New York City. It was there that she met her now-husband, potter Alex Matisse, who was making ceramics nearby with North Carolina clay in a 36-foot, wood-burning kiln.

“I had no idea that pottery was such a thing,” says Connie Matisse. “That people would literally line up for days in advance of kiln sales to be the first to get their hands on a pot. And then, finally, a year into dating and a year into setting up the pottery, we had our own kiln sale. People showed up from several counties away, several states away and it blew my mind.”

After tapping into that niche ceramic collector scene, the Matisses and John Vigeland–East Fork’s now CFO–joined forces and turned East Fork into what it is today.

Matisse also attributes the city’s design-forward affection to the nearby Penland School of Craft, a craft education center “dedicated to the creative life” that’s about an hour outside of Asheville.

Discover more about Asheville at exploreasheville.com.

A Midcentury-Modern Forest Oasis by Paul Rudolph Lists for $2.9M

Expert Recs: 11 Kitchen and Home Essentials That Are Kind to the Planet

The History of the Tripp Trapp Chair, Which Changed the Children’s Design Game