You may not have heard of Display Week, but it’s a thing and of particular interest at this year’s event are some new high speed displays coming from AU Optronics. The one pictured above is a curved WQHD (3440×1440) monitor with DisplayHDR 1000 certification and a speedy 200Hz refresh rate, and that’s great. But AU Optronics also teased some displays that are more than twice as fast.
For anyone unfamiliar with AU Optronics, the Taiwan outfit is a major player in display panels and is no stranger to high refresh rates. In fact, the ASUS ROG Swift PG259QN with an insanely fast 360Hz refresh rate rocks an In-Plane Switching (IPS) panel manufactured by AU Optronics. And incidentally, that’s as fast as gaming monitors go right now, but not for long. 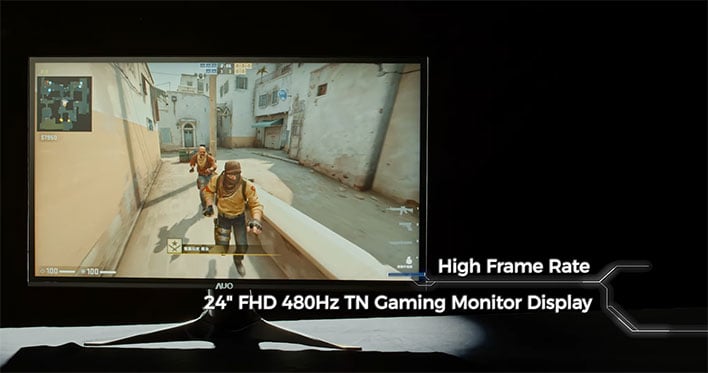 At this year’s Display Week event, AU Optronics teased some laptop and desktop displays with blazing fast 480Hz refresh rates. The one shown above is a 24-inch Full HD 1080p monitor built around a Twisted Nematic (TN) screen. TN panels generally don’t look as good as IPS or Vertical Alignment (VA), but are generally cheaper and, in this case, really fast.

This particular model also touts a sub-1ms response time, though AU Optronics doesn’t mention if that’s a gray-to-gray (GtG) or some other measurement.

It’s not just desktop monitors that are getting a speed upgrade, so are notebook panels. AU Optronics also teased a 16-inch gaming laptop display with the same 1920×1080 resolution and scorching 480Hz refresh rate. The response time is ever-so-slightly higher at 1.xms, which even at the high (1.9ms) is still very responsive.

That’s probably a TN panel do, which is a bummer for anyone who either prioritizes image quality or wants both (speed and image quality). That said, these kinds of displays will undoubtedly find an audience among competitive gamers. Pushing 480Hz is a tall ask from today’s GPUs, though less demanding games used in esports often cruise into triple-digit framerate territory on even modest hardware, especially at 1080p.

The road to 480Hz has been a long time coming. We wrote about a prototype 480Hz display back in 2017,. and it looks we’ll finally see such super-fast displays either later this year or sometime in 2023.