It looks like G.Skill has cracked the code to one of the biggest complaints with DDR5 memory, that being propensity for high CAS latencies. There have been efforts to release lower latency kits, some better than others. Now for the first time there are a handful of DDR5 memory kits that bring the CAS latency to below 30.
Not just one notch either, but two notches—G.Skill’s new extreme low latency DDR5 memory kits boast a CAS latency of 28 in both 64GB (32GBx2) and 32GB (16GBx2) packages. These are somewhat higher speed kits too, at DDR5-5600 as opposed to DDR5-4800. 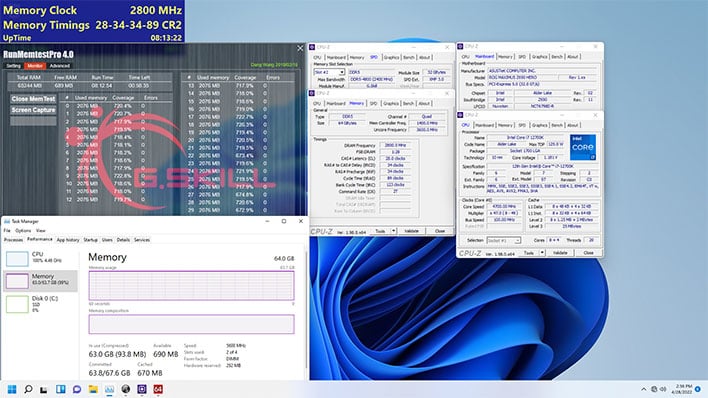 That’s not just hyperbole. Yes, CL28 still looks high compared to what is available in the realm of DDR4.But if you want to calculate real-world RAM latency in nanoseconds, the formula is to divide the CAS latency by the RAM speed, and then multiple the result by 2,000. So in this case, 28 (CAS latency) divided by 5,600 (MT/s) is 0.005. Multiply that by 2,000 and you come up with 10ns.

To put that into perspective, the real-world latency is equivalent to a DDR4-3200 kit running at CL16. So you’re looking at the same real-world latency rating between G.Skill’s newest DDR5-5600 kits and a tightly timed DDR4 memory kit, but at a much faster transfer rate (plus the other benefits of DDR5 thrown into the mix).

This is the moment we’ve been waiting for. Well, the beginning, anyway. We still want to see even faster memory kits materialize, as well as continue to push lower timings. And most importantly, the cost needs to come down—DDR5 is expensive compared to DDR4.
Nevertheless, this a big step in the right direction. G.Skill’s also offering the same CAS latency in 32GB and 16GB DDR5-5200 kits. All four new DDR5 options will be available across G.Skill’s Trident Z5 RGB, Trident Z5, and Ripjaws S5 series towards the end of next month.