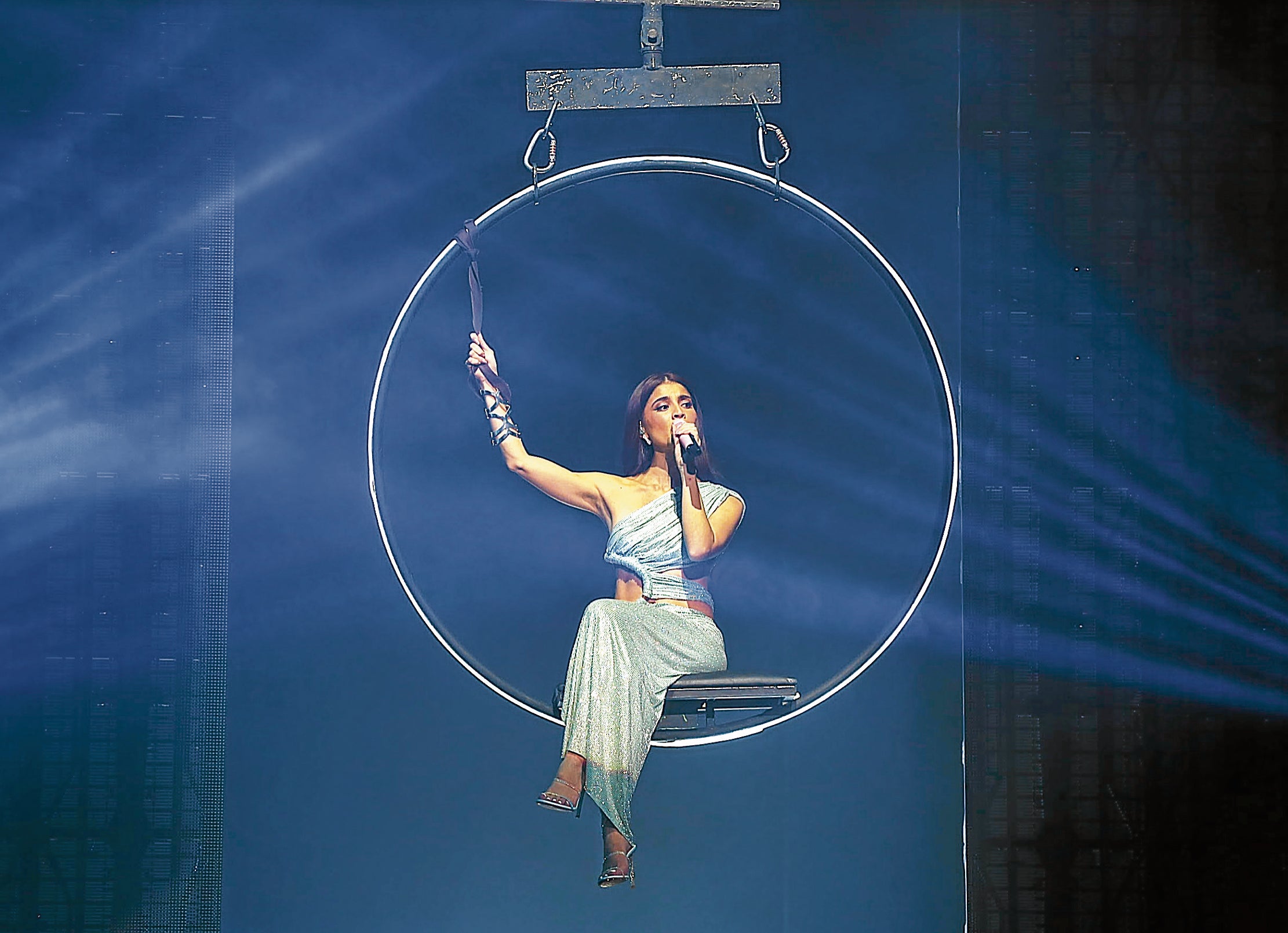 Despite her hiatus on the local concert scene, Anne Curtis’ concert “Luv-Anne” at the Newport Performing Arts Theater is proof that her luster as a performer hasn’t dimmed at all.

Anne opened her comeback concert with Dua Lipa’s hit “Levitating.” To complement the song’s electro-disco beat and sci-fi elements, she emerged from a descending cocoon clad in a neon green body suit, welcomed by a screaming throng of fans who filled the venue to the rafters. She followed this up with Blackpink’s “How You Like That,” enthusiastically singing Korean and English verses.

After the back-to-back production numbers, we heard the signature greeting only she could deliver in her high-pitched voice, “What’s up, madlang Resorts World?”

To catch her breath, Anne incorporated her spiel with self-deprecating humor, “May hingal factor na… halata na ’yung edad.” But nobody in the audience really noticed because she more than made up with it with her stunning presence and toned physique. It was obvious everyone was just happy to watch Anne again after the three-year absence in show biz to raise her daughter.

“I am just thankful that in spite of everything, you guys are still here. Another reason why I’m here is love… love for music, a passion for doing something that we love. And I think that’s also why you guys are here… because of love. It’s been so long, yet you’re still here to support me.” 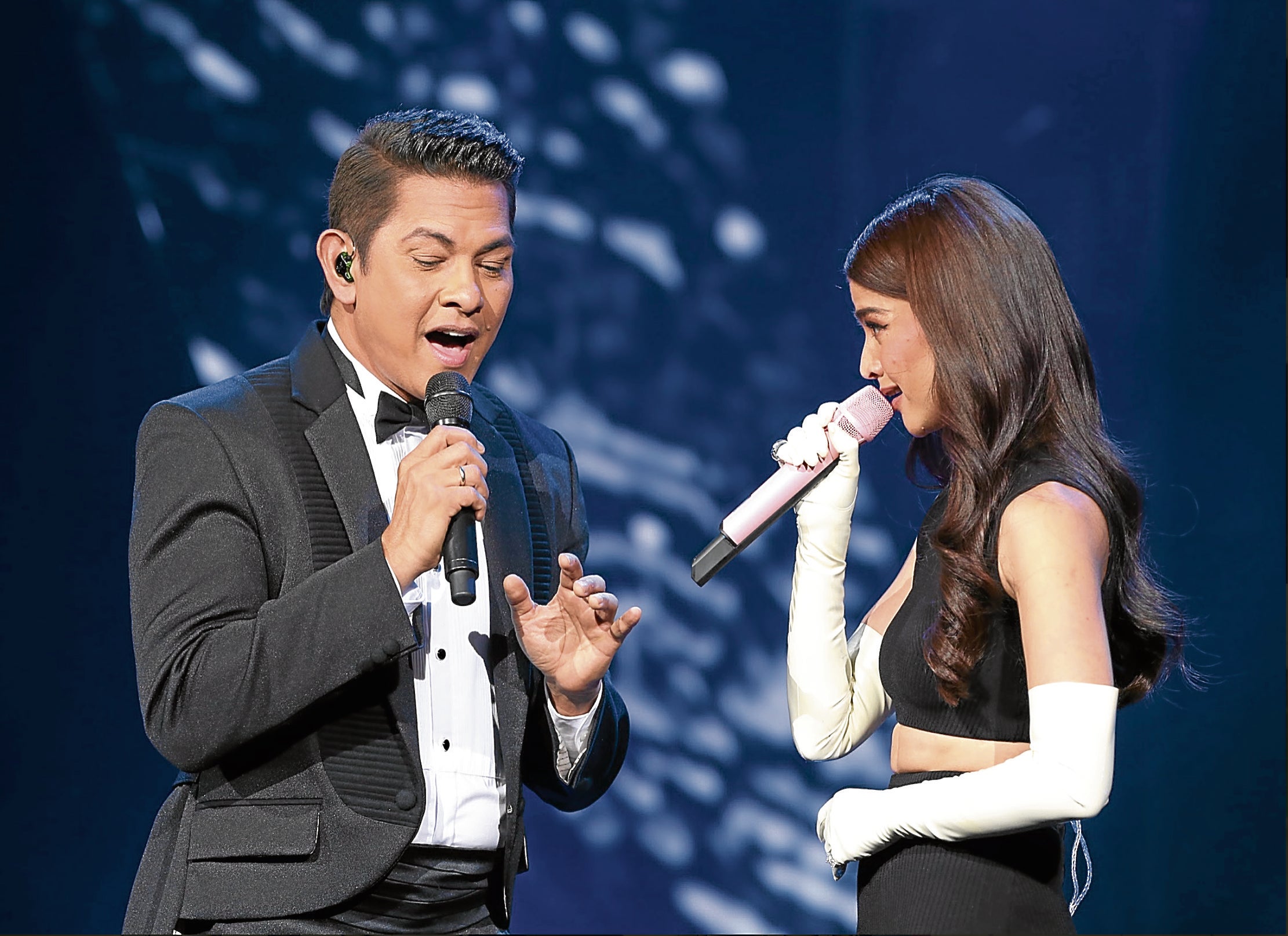 There was no lull in between segments, thanks in large part to the concert’s creative team led by director Paolo Valenciano, creative director Georcelle Dapat-Sy, musical director Louie Ocampo and writer G3 San Diego, who made sure that Anne’s comeback concert is executed with seamless precision.

The dream team of fashion stylists Liz Uy and Pam Quinones hit the bull’s-eye in making sure that every outfit Anne donned would be perfect for her. For her Dua Lipa and Elton John cover of “Cold Heart,” which she sang with Darren Espanto, Anne wore a gorgeous purple-and-white feather-y gown.

Perhaps the most memorable number for the evening was “Empire of Pink,” where Anne strapped herself to a harness as she stood on a pole platform that hoisted her from the stage to the center of the theater, where the viewers were.

Her “Mapa” number with SB19 saw Anne slipping into a pair of strappy silver high heels and a divine Grecian-inspired aqua blue gown that displayed her toned abs. The sparkly dress complimented the lullaby melody of the song.

Anne also showcased her mad rapper skills when she shared the stage with Fil-Am rapper Ez Mil in the viral hit “Tayo’y Pilipino,” a homage to their Pinoy heritage.

But of all the outfits that Anne wore for the evening, the Audrey Hepburn-inspired classic black ensemble designed by Norman Rene de Vera and worn with long white gloves for her “Wag Ka Nang Umiyak” duet with Mr. Pure Energy himself Gary Valenciano, was perhaps the crowd favorite.

Anne confessed that performing the song was one of the scariest numbers for the evening, but we must say that she conquered the challenging number with flying colors. She supplemented the same fashion ensemble with a feathered headpiece and a long coat that bore the concert’s title “Luv-Anne” while she sang her version of Celine Dion’s “It’s all Coming Back to Me Now.”

Fighting back tears, Anne shared that she was trying to muster up the courage as they were preparing for the show saying, “It was really all about being pa-laban… Na kaya ’yan, because I didn’t have the confidence [to pull it off] anymore.” The soldout crowd proved her wrong.

“So tonight, from being pa-laban, ‘Luv-Anne’ is actually a love letter to all of you. Taking the time to watch me, even if I’m not the best singer, but [someone who’s] improving. This is me thanking all of you for staying by me all these years. This is me giving that love back.”

How to Start a BookTok