PNP destroys P9M worth of cannabis in Lanao Del Sur 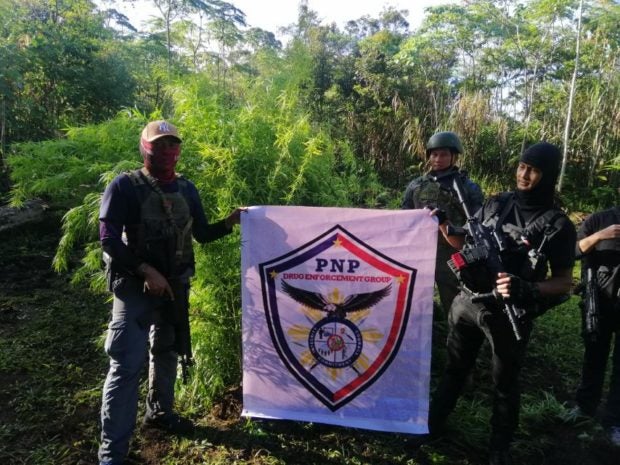 Members of the PNP Drug Enforcement Group conducted several anti-drug operations in Lanao Del Sur on Sunday, June 19, 2022. (Photo from the Facebook account of the PNP)

MANILA, Philippines — Members of the Drug Enforcement Unit (DEU) of the Philippine National Police (PNP) destroyed P9 million worth of cannabis at four clandestine farms in Lanao Del Sur on Sunday, according to a PNP statement on Monday.

According to the PNP in a police report on Monday, the first four farms were discovered on June 19 by police operatives.

The first two plantations were in Sitio Dibarosan, Barangay Dilimbayan in Maguing, where the anti-drug operatives seized a total of P5 million worth of marijuana plants.

No cultivator, however, was arrested in both operations.

“We have been operating in many plantations for the past days in various areas around the country. We will get to the bottom of this and find out who are those responsible,” the PNP officer in charge, Lt. Gen. Vicente Danao Jr., said in a statement.

The other two plantations were in Barangay Bato-Bato, also in Maguing, where the operatives seized a total of P4 million worth of marijuana plants.

BETWEEN HELLO and GOODBYE by EMMA SCOTT