Maybe you missed out on Prey when it first came out all the way back in 2006, and then again when Bethesda released a reboot developed by Arkane Studios (which it acquired in 2010) in 2017. Five years later, the Prey reboot still holds up. Even better, you don’t have to take our word for it, you can experience the game for yourself at no cost.
For the next several days, Prey is free at the Epic Games Store. The only knock here is a bit of confusion over what version you’re getting. Epic lists it as the “base game,” but references the Mooncrash expansion in the description. That’s bundled in with the Deluxe Edition, and the listed price ($39.99) is in line with that package. If it is the Deluxe Edition, you’ll also get the Typhon Hunter expansion (which is also referenced in the description).
Either way, this is a great deal—it’s a free game, regardless of whether or not the expansions are tossed in. This is widely considered one of the best games of 2017, and as we noted in our Prey performance and optimization guide, it engulfs players in a deep, engaging story in a single-player experience with heaps of replayability, alternate endings, and play styles to explore.

You have until May 19 at 11:00am to claim Prey for free. Once added to your library, it’s yours to keep forever (as long as the Epic Games Store stays open).

Score Two More Games For Free, And Get Eight Games For Just $3 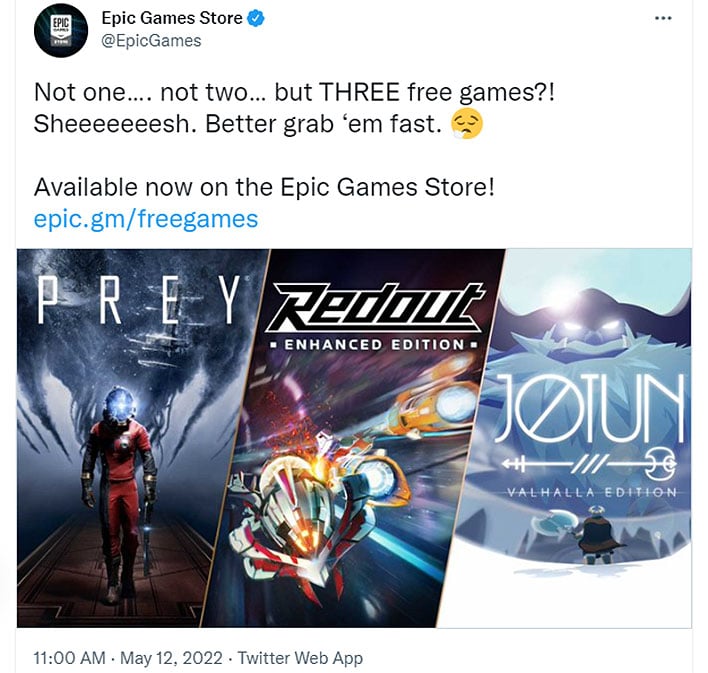 Epic is also serving up to other free games these week, including Redout: Enhanced Edition (free, save $9) and Jotun: Valhalla Edition (free, save $14.99). Starting with the former, this one will appeal to arcade-style racing fans, with high-speed, adrenaline-soaked action in a sci-fi theme, serving up single-player, multiplayer, and co-op gaming modes.

As for Jotun: Valhalla Edition, this is a hand-drawn, action-exploration title set in Norse mythology (so a very different gaming experience). You play as Thora, a deceased Viking warrior on a mission to prove herself to the Gods in order to enter Valhalla.

After you’ve claimed your free games, you can stock up on seven additional titles for nearly no cost—the Guardian Bundle 7 is just $2.99 at Fanatical (96% off) right now. The bundle unlocks Steam keys for eight games, including…

None of these are triple-A titles, but they do serve up a variety of gaming experiences for less than a Tall (small) Mocha Cookie Crumble Frappuccino at Starbucks.

The Guardian Bundle 7 is discounted until the end of May 23, and you also get a 5% coupon to use on your next order with purchase.

Final Fantasy 14 developers are cracking down on illicit mods