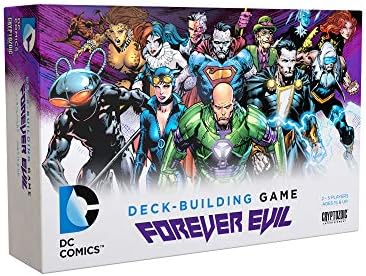 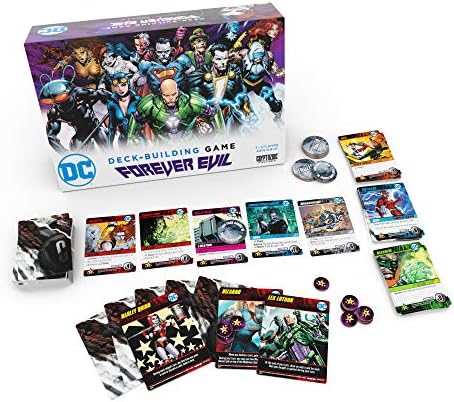 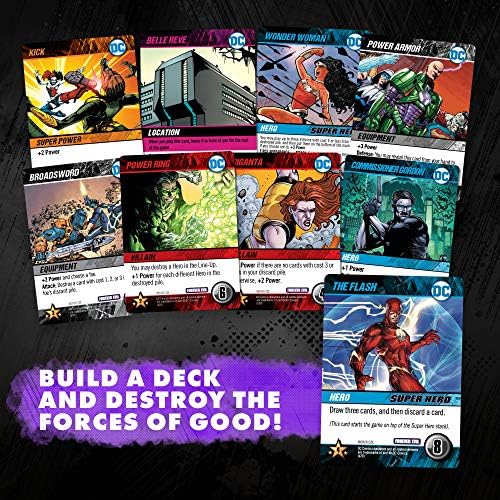 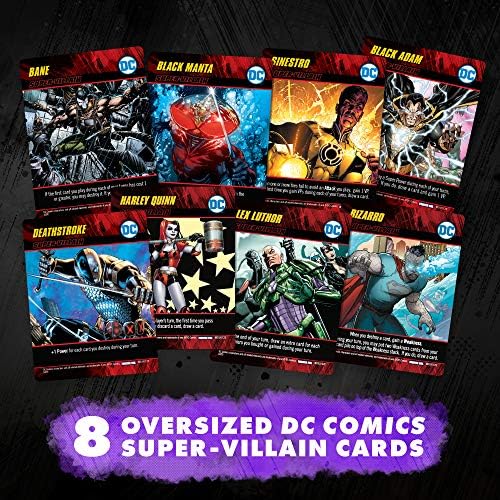 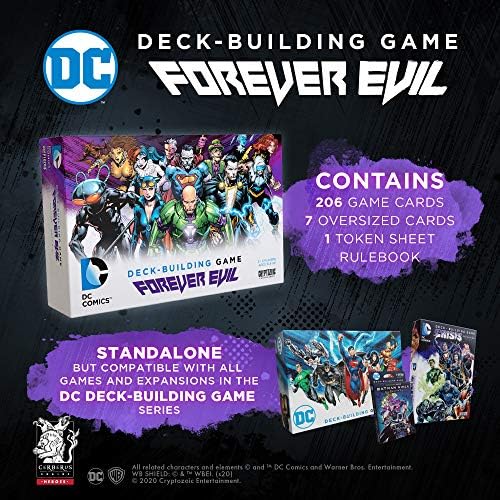 FOREVER EVIL: It’s fun to be bad! In the DC Comics Deck-building Game: Forever Evil, players finally get to play the game as some of the most famous Super-Villains in the DC Universe. Craft a truly demented deck and give those Justice League do-gooders what’s coming to them! With a name like Forever Evil, you can expect to find new dangerous Attacks, rugged Defenses, and more ways to mess with your opponents. Literally dozens of new ways for you to look at your friend and say, “Sorry, buddy.”
YOUR VICTORY IS ASSURED: Card destruction is rampant in the set! As every good Super-Villain knows, henchmen you leave behind don’t count toward the bottom line. If you’re tired of ending the game with Starter cards still in your deck, then this is the set for you! Forever Evil introduces Victory Point tokens to DC Deck-building Game! Now you can earn VPs throughout the game. Just be on the lookout for lowly thieves who would steal away your hard-earned loot.
VERSATILE GAMING: Standalone game, but compatible with all games and expansions in DC Deck-Building Game series.
KEY FEATURES: Play with as many as 2-5 players and with the most infamous villains from the DC Universe. Can you defeat the most powerful Super Heroes in the world? Fully compatible with previous and future Cerberus Engine: Heroes games, New Heroes, Villains, Super Powers, Equipment and Locations!
ABOUT US: Since 2010, Cryptozoic Entertainment has been dedicated to the concept of “Fans First,” striving to develop the most creative and sought-after products for pop culture enthusiasts worldwide. As an entertainment company with a diverse portfolio of licensed and original IPs, its catalog covers a broad spectrum of table top games and collectibles. Our passionate team aims to inspire gamers and collectors all around the globe while bringing fans as part of the Cryptozoic community.

Added to wishlistRemoved from wishlist 0
$14.99