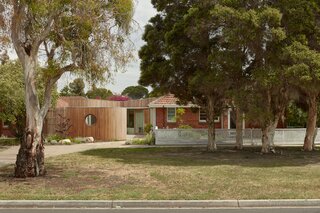 In the early 20th century, an urban planning movement that promoted small communities set around a central city and separated by greenbelts began to gain momentum. These so-called “garden cities” balanced the best of country and city living, and one such example is Williamstown North, a leafy suburb of Melbourne. When local firm Architecture Architecture set out to renovate and extend a rundown cottage in the neighborhood, they were careful to honor those principals.

“Located on a corner lot with its backyard facing onto Park Crescent, this project presented us with an usual challenge: how to create a private backyard while contributing to the generous, green park life of the heritage streetscape,” says architect and project director Michael Roper.

The firm built off the side of the cottage, creating an addition that includes an open-plan kitchen, dining, and living space. It’s fronted with a curving glass wall that’s reminiscent of an aquarium, which frames an exterior planter and a circular courtyard.

A slatted timber awning above the glazed wall echoes the rhythm of timber fencing and cladding found elsewhere in the project, and filters light to create a dramatic play of shadow across the facade and inside the living area.

The extension is primarily for entertaining, but Architecture Architecture also updated the private zones, which are tucked away in the cottage. Minor alterations have given each of its rooms new functionality: There are zones for sleep, study, listening to music, and relaxation.

“At the moment of transition between the old house and the new, the threshold swells to form a modest gallery, where the occupants of this house—an artist and a curator—share their love of the visual arts,” says Roper.

The curves of the new living spaces are mirrored by a new timber-clad artist’s studio, which is situated across the courtyard from the main residence. Tall, battened fencing conceals the property, creating privacy for the residents. Still, glimpses of the neighbor’s terra-cotta rooftop maintain a sense of connection to the surroundings.

Roper describes the porthole-style window of the studio as a muse in that it frames the goings-on of the street. “From between the trees across a vast nature strip, a fence-like shed with a cyclops eye peers back at curious neighbors,” he says.

With the extension, the architect created an “aquatic atmosphere” that’s emphasized by the pale green bagging over the brick walls and the refracted light through the glazing. Elsewhere, subtly crafted, earthy materials are celebrated—think concrete, rendered brick, timber, and porcelain.

“Architecture Architecture had a unique and beautiful vision for our home,” say the clients, Richard and Rebecca. “We are still exploring and discovering nuances and subtleties of the spaces that they created—the volumes, the materials, the textures, the palette—and the light as it changes throughout the day and year. This will be a joy for many years to come.”

What IP rating is needed in a bathroom?

In Portland, Oregon, the Paths to Homeownership Are Multiplying

A Family’s Milanese Apartment Is Reimagined With Miles of Tiles