The Paris Apartment by Lucy Foley 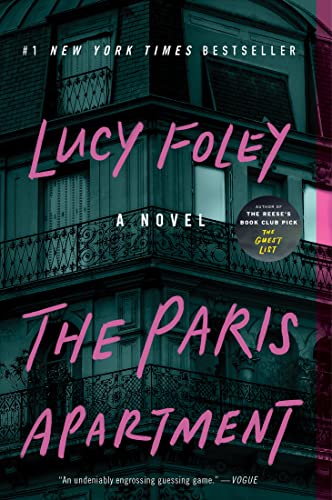 At the risk of sounding conceited, when you read as many thrillers as I do, at some point it becomes easy to predict the twist. It’s fairly uncommon for me to be completely surprised by the ending of a psychological thriller, but Lucy Foley does it every time. The Paris Apartment is no different.

The Paris Apartment is told from multiple points of view, with the heroine being Jess, a barmaid from England. Jess is broke and possibly in a tiny bit of trouble with the law, so she goes to Paris to stay with her brother Ben. When she arrives at Ben’s apartment she finds him missing. At first she assumes he just stepped out and forgot her arrival, but more troubling clues begin to appear. Ben’s cat has bloodstains in its fur, stains that don’t belong to the animal. The floor in front of the door appears to have been bleached, and she finds his St. Christopher medal left behind with a broken chain.

As Jess takes up the search for her brother we meet the eccentric cast of characters that occupy his apartment building. There’s Sophie the socialite; Mimi, a teenage girl struggling with her identity; Antoine, a rage-filled alcoholic; Nick, presumably one of Ben’s closest friends; and the concierge, a woman who appears and disappears like a wraith.

What I loved about this book is that the apartment building was like a character in itself. While this isn’t a ghost story, the apartment building has gothic, haunted house elements to it. There are hidden staircases and dumbwaiters, an extensive wine cave in the basement, and the abandoned maid’s quarters. Things move and shift around the building as if a ghost is toying with Jess, although that isn’t the case. There’s a spectral, haunted feeling to this book that is just so enjoyable.

Jess’s exploration of the apartment building mirrors her exploration of Ben’s mysterious life in a wonderfully clever narrative twist. It’s like every hidden staircase reveals a hidden element of his activities.

I don’t want to go into too much detail and risk spoiling the novel, but this is a thriller with a delightfully spooky atmosphere, gothic elements, and a fantastic ending that took me totally by surprise. It’s also light on violence so if that’s not your thing, this book shouldn’t bother you. It’s a perfectly tense, perfectly executed read and I highly recommend it.

From the New York Times bestselling author of The Guest List comes a new locked room mystery, set in a Paris apartment building in which every resident has something to hide…

Jess needs a fresh start. She’s broke and alone, and she’s just left her job under less than ideal circumstances. Her half-brother Ben didn’t sound thrilled when she asked if she could crash with him for a bit, but he didn’t say no, and surely everything will look better from Paris. Only when she shows up – to find a very nice apartment, could Ben really have afforded this? – he’s not there.

The longer Ben stays missing, the more Jess starts to dig into her brother’s situation, and the more questions she has. Ben’s neighbors are an eclectic bunch, and not particularly friendly. Jess may have come to Paris to escape her past, but it’s starting to look like it’s Ben’s future that’s in question.

Everyone’s a neighbor. Everyone’s a suspect. And everyone knows something they’re not telling.

This book is available from:

As an Amazon Associate we earn from qualifying purchases.

We also may use affiliate links in our posts, as well.
Thanks!