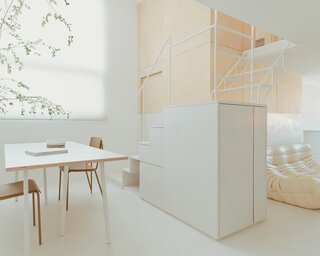 The homeowners of this 393-square-foot apartment in Taipei City bought it sight unseen. Instead, they relied on a “geomancer” (a feng shui master), who advised them that the location in and of itself would be “good for their future development.” The apartment, however, would need some updates if the couple were going to follow the advice.

Jeff Wang, director of local firm 2Books Design, remembers seeing the space for the first time. “It was small and narrow, with a dark, oppressive feeling,” he says. The clients both work from home with their two cats, so they wanted bright spaces for living and working.

2Books started by removing most of a mezzanine level abutting the windows, retaining only the section along the opposite wall. “The greatest challenge was attaining good lighting without losing too much usable floor space,” says Wang.

The ground floor now features a soaring ceiling, providing the couple with a bright workspace and dining area. The kitchen, living areas, and a powder room are tucked under what remains of the mezzanine.

Interior finishes and decor in whites and natural hues were selected to foster an atmosphere of openness. The floors, cabinets, and staircases are clad in wood and finished with a white-toned mineral paint.

“We spent a good amount of time discussing colors,” notes one of the clients of the apartment’s white and blush walls that change subtly with the shifting sunlight.

2Books opted for as little ornamentation as possible, wanting to draw attention to the spatial layout, materials, and textures, such as the hand-troweled walls. The client also favored a pared-down aesthetic, and the simplicity and lack of clutter make the space feel open and fresh.

“We don’t have much stuff,” says the client. “It is mostly hiking gear, which is stored neatly under the stairs.”

The storage is built into the staircase, which serves as a primary visual element in the apartment. It consists of a cement base, stacked birch plywood steps, and metal handrails. “The stairs are ingenious,” say the clients, drawing attention to the pleasing contrast between the solidity of the ground floor steps and the airy lines of the upper steps.

To set off the stair’s boxy base, 2Books created a circular storage closet beside the entrance to serve as the room’s horizontal focal point. While subtle, the closet draws attention for its shape and the texture of its metallic frame.

Because the home is built in a dense area, 2Books installed shades on the large main windows to ensure privacy while maximizing natural light. On sides of the homes where there are no neighbors or passersby, the team left the windows bare.

Wang says he intended the white-toned walls to serve as a blank canvas for the “vibrant and organic” lines of rough-leafed holly, thus creating a play of shadows that shifts over the course of a day. The plant is native to Southeast Asia and has long been used as an ingredient in traditional Chinese medicine.

“We love the workspace and the holly that the designer selected for us,” says one of the the clients. “The space has the best lighting and the highest ceiling in the house, and the holly makes the atmosphere of the space relaxing.”

On the mezzanine level, 2Books positioned a cozy bedroom and private bath. The team maintained the same sense of openness in the upstairs space as downstairs, using pocket doors and shades to allow for privacy when needed.

To match the lightness of the architectural lines, the design team chose Hay’s Petit Standard Chair and Loop Stand Table for the work room. Both share a geometric simplicity that perfectly resonates with the home’s minimalist sensibility.

The only other furniture in the home, also chosen by 2Books, is a classic Togo couch for the sitting area downstairs and a floor bed for the bedroom, both of which are low-slung and comfy-casual in style.

Understanding the Role of Vitamins for Weight Loss