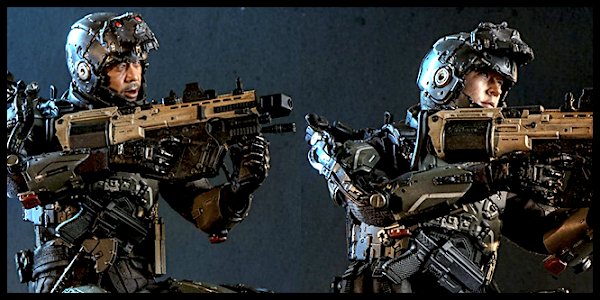 Thanks to a tweet from @hottoysofficial, I am reminded of a feature film I’d blogged about in 2019, which now leads me to the trailer for “WARRIORS OF THE FUTURE”, since scheduled for August 25th premiere! Here is the original Cantonese language trailer (with English subtitles, so remember to embiggen to watch):

PLOT: “Under the crisis of extreme environmental deterioration in the future, the fall of meteorites brings extremely lethal alien creatures, and the earth is caught in internal and external troubles. Mecha warriors was ordered to take risks and face the crisis head on.” 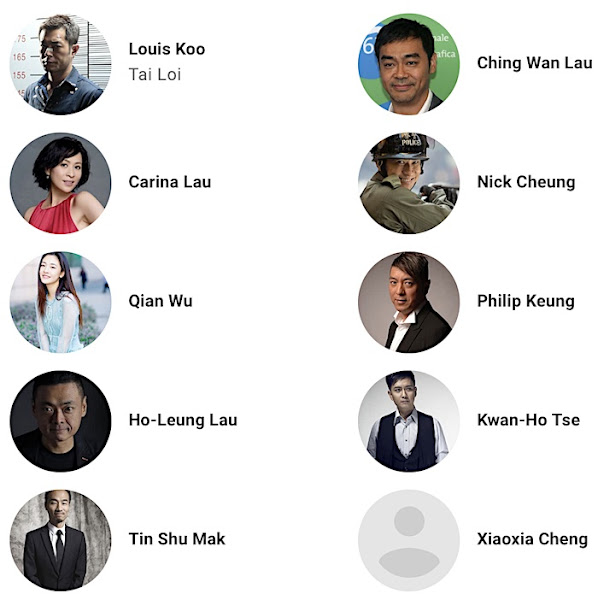 Directed by Ng Yuen Fai Ng, “明日戰記 / 明日战记” stars Louis Koo, Sean Ching Wan Lau (both of whom have their character made I to 1/6th scaled figures / see below) and Carina Lau (above screengrab of CAST via IMDb). This 1h 52m long feature film is a co-production between Hong Kong and China, and as you can see from the trailer, is sci-fi to the MAX! Featured below is a “Making-Of” featurette (in spoken Cantonese with no English subtitles tho):

Putting aside “original design” and “CGI quantity” aside (as no doubt this’ll be what folks’ll be picking on), another question might well be: Will it be “all flair and no bite”? Or will it explode our collective minds? I am keen to find out either way. Now for the TOYS! 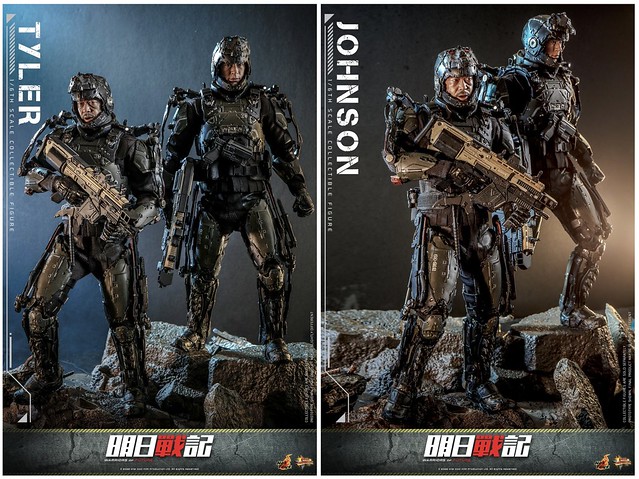 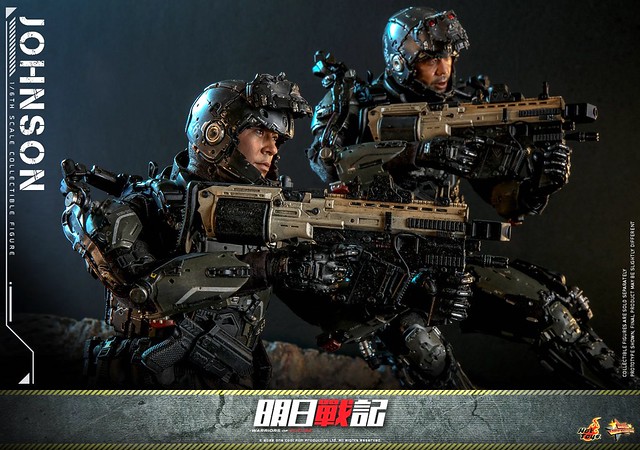 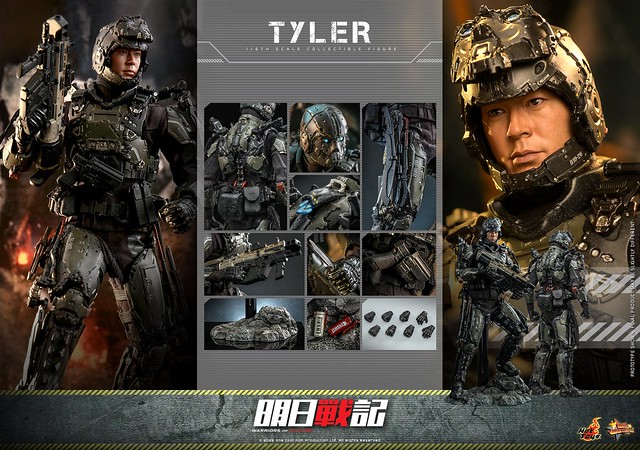 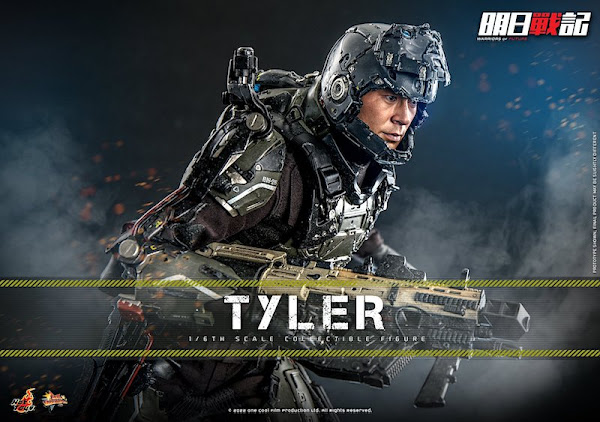 HOT TOYS (Partial) PRESS: “Meticulously crafted based on the appearance of Louis Koo as “Tyler” in the movie, the figure features a newly developed LED light-up helmeted head sculpt with impressive likeness, his dark green, black exosuit and mechanical exoskeleton weathered from battle, LED-lighted torch on shoulder, gear holsters on the delicate suit with greatly-detailed weapons such as heavy machine gun, blade, dagger, pistol, grenades, and a rocky themed diorama figure base.” 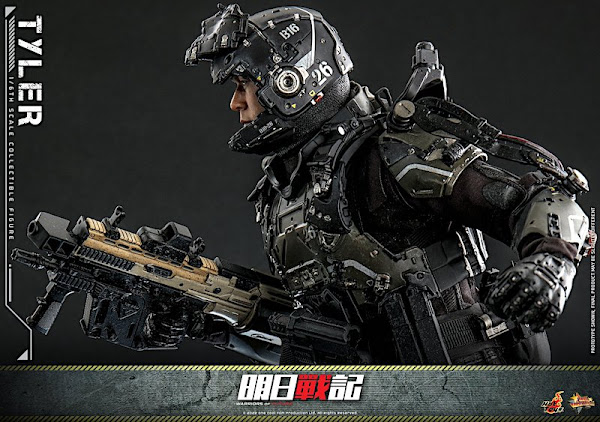 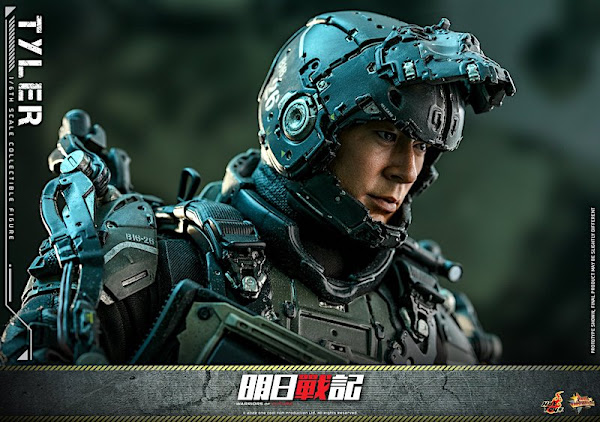 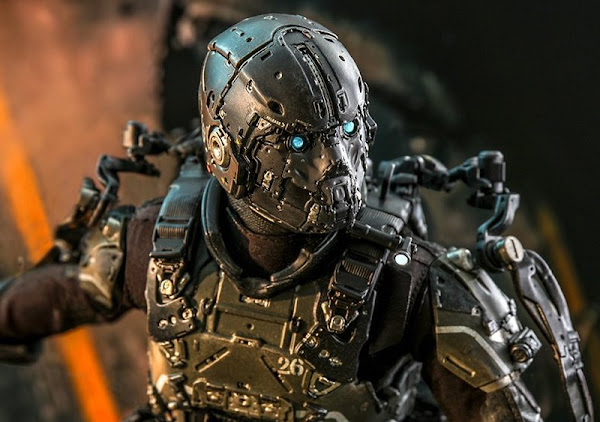 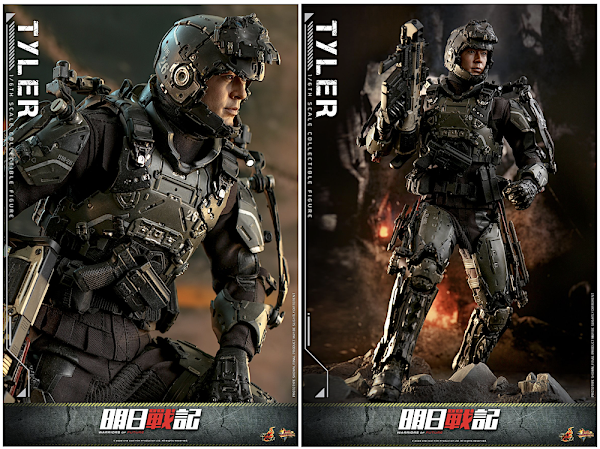 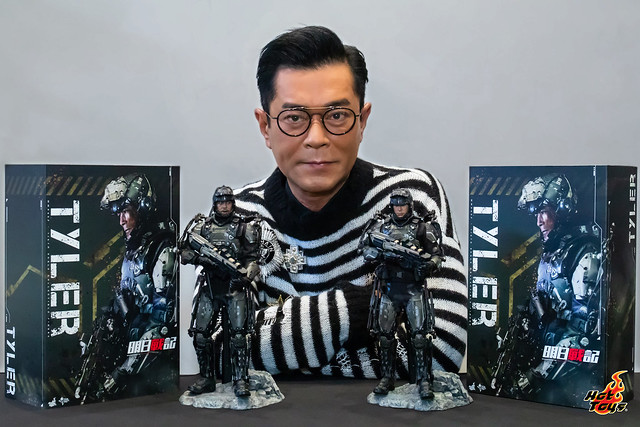 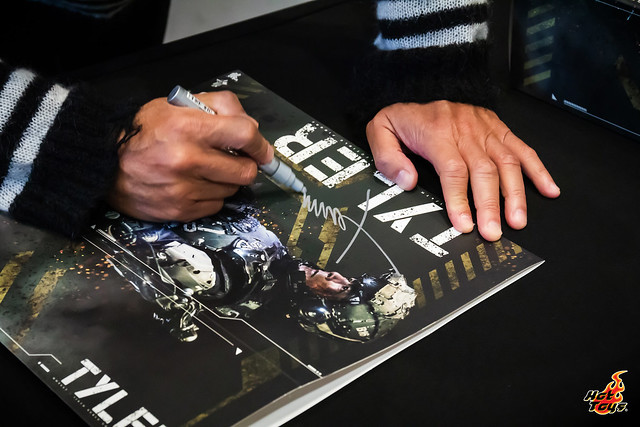 “Hot Toys is grateful for this opportunity to meet with #LouisKoo, the leading actor and film producer of #WarriorsofFuture, and to share our latest prototypes feature Tyler & Johnson 1:6 figures. Thank you for your appreciation towards our creations!”. (@hottoysofficial) 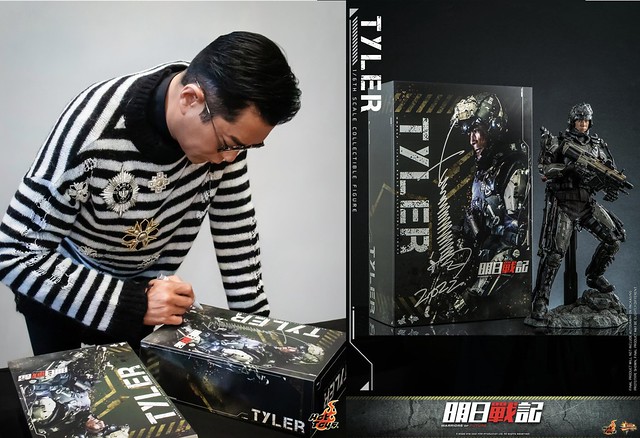 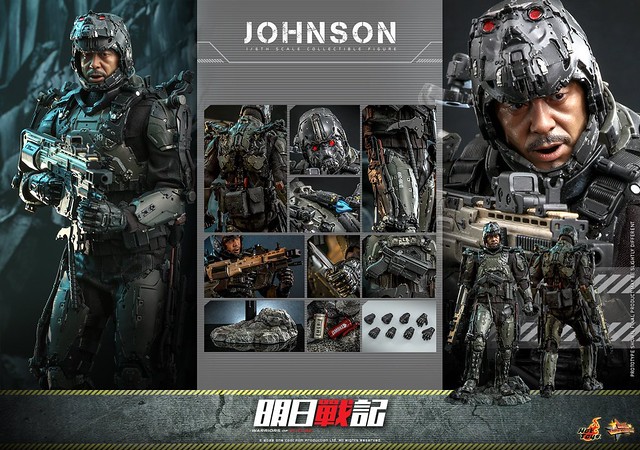 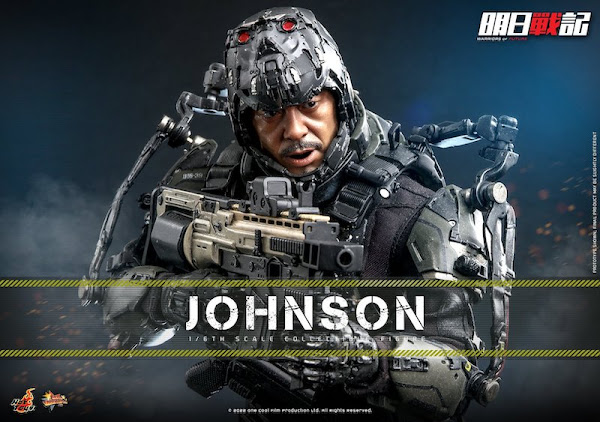 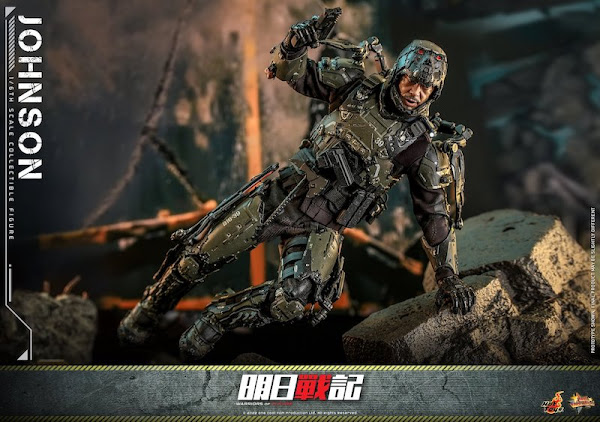 HOT TOYS (Partial) PRESS: “Finely crafted based on the appearance of Sean Lau as “Johnson” in the movie, the figure features a newly developed LED light-up helmeted head sculpt with remarkable likeness, a weathered exosuit in dark green and black with decals and mechanical exoskeleton, LED-lighted torch on shoulder, gear holsters on the complicated suit with highly-accurate weapons and accessories including a heavy machine gun, an axe, a dagger, a pistol, grenades, and a rocky themed diorama figure base.” 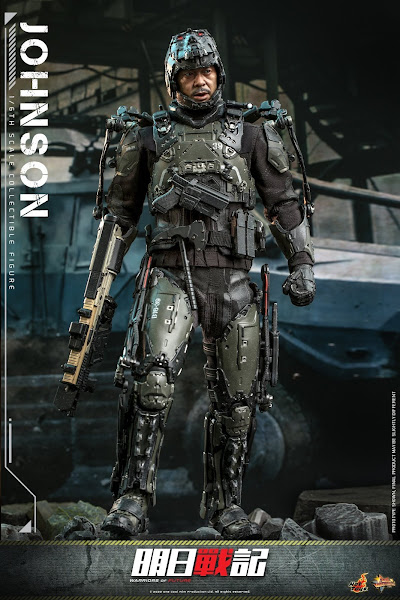 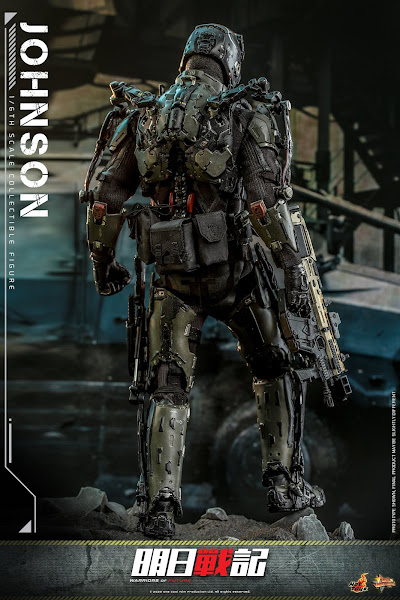 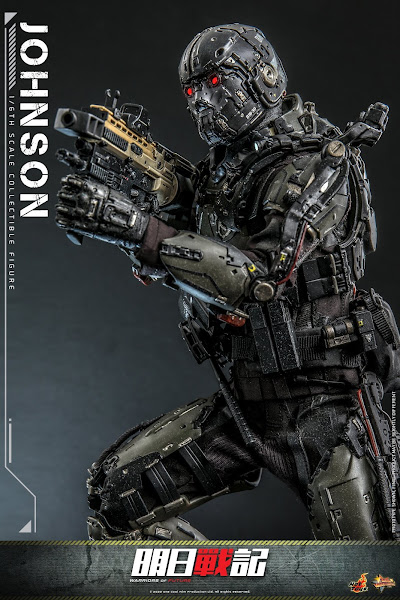 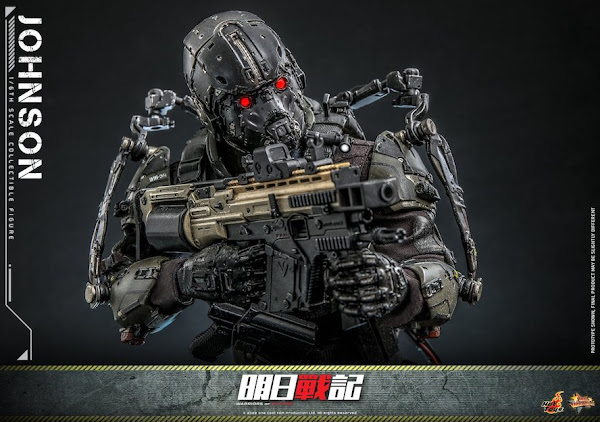 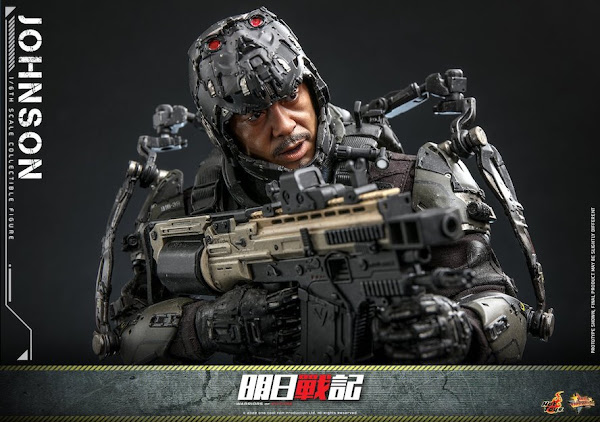 White House says US has nothing to rectify over Taiwan