Would-Be Congressman Greg Casar Is Worried About Where He’s Going to Live, Too 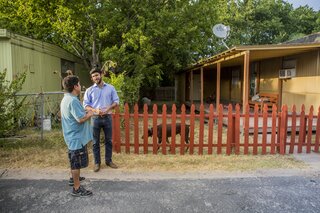 Greg Casar has always been ahead of the curve. Eight years ago, the then 25-year-old UVA grad ran for City Council as a progressive outsider; when he won, his opponent—a longtime crusader against such public menaces as fluoridated water—attempted to sue in Texas Supreme Court, alleging (what else?) voter irregularities. Today, Casar is running for a seat in the United States House of Representatives, and having cleared the primary field earlier this year, he’s fairly assured of winning his heavily-Democratic district come November. A key component of Casar’s farsighted political approach: housing, which has been at the center of both his message as a candidate and his tenure as a councilman. Casar says he’s intimately familiar with the struggles of everyday Austinites, and he’s been instrumental in passing new laws aimed at keeping his hometown affordable despite skyrocketing growth there in recent years. The Congressman-in-waiting talked to Dwell about what he’s done so far in the housing sector, as well as what he hopes to do once he gets to Washington.

Let’s start at the beginning. How did you come to focus on housing as a key issue in your political career?

After I got out of college I was working as a labor organizer, fighting for wage increases for construction workers, custodians, and restaurant employees in Austin. At that time, increasing housing prices in the city were hitting people hard, and the hardest hit were those making eight or nine dollars an hour: you’d have three or four families of construction workers all living in the same house or splitting an apartment. I got engaged because we decided to be part of a coalition that was trying to pass a citywide affordable-housing bond measure; that year, six other measures on the ballot passed, but that one failed. It became really clear to me that not only was the housing crisis getting worse, but that we needed to mobilize voters to prioritize housing, because otherwise, it would just keep falling to the bottom of the list of priorities—even though it was at the top of list for all the folks I was working with. We managed to bring that ballot measure back, and the next time, it passed. After that, I made housing my top issue, and once I joined the City Council, I became chair of the housing committee.

That has to have been a tough post. The metro area’s population has swelled by close to 50 percent over the last decade, and there’s been a lot of conflict between the “keep Austin weird” camp and those who want to see more housing get built. How do you thread that needle?

It comes down to seeing housing for the progressive, bread-and-butter political issue it should be, and recognizing that the status quo just won’t work. When you have so many more folks moving into a city like Austin, you’re going to see a housing shortage and people pushed out unless you’re committed to building real affordable housing. And we haven’t been: what we’ve been building is mostly big McMansions rather than dense rowhouses, and big expensive luxury apartment buildings that don’t include a lot of lower-income mixed units. At the same time, we also have a dearth of tenant rights and renter rights, and that pushes up prices on existing housing stock. In the end, I think that big companies and a national trend towards inequality have a big share of the blame, but so does the shortsightedness of NIMBY politics. We have to tackle both.

What kind of things have you managed to do, tackling-wise?

Since I’ve been on the council, we’ve done things like battling back to save the Covid eviction moratorium, as well as making it easier for developers to build more lower-cost ownership apartments: where before you had less than a quarter of a building’s units aimed at middle-income buyers, now you see as much as 50 percent or 75 percent in some projects. But the most important measure we’ve been working on is a revamp of the citywide zoning code, which has been basically untouched since the 1980s. The plan we’ve passed creates incentives so that, for example, instead of scrapping a little house and replacing it with a slightly bigger one, you could preserve the existing house, and then add three or four smaller separate units to the property.

We’ve also created rules that allow big parking lots and strip malls to be transformed into mixed-income housing instead of saving them for strictly commercial uses. The whole measure is so important—but it’s been tied up in the courts on appeal, since a lot of homeowners here are opposed to it. At the same time, we’ve been limited in terms of what we can do in Austin by our state legislature, which has done things like revoke our inclusionary zoning laws, so that we can’t charge fees on developers to finance low-cost housing construction. And while all this is going on, prices here just keep going up. That’s what I mean when I say the status quo just doesn’t hold water.

For all the difficulty at the local level, the odds of advancing bold new housing legislation in Congress don’t look much better. Assuming you are headed to the House next year, that’s got to be weighing heavily on your mind.

The thing that appeals to me about holding office at the national level is there’s a chance to shape the policy agenda of the whole country. Yes, legislation is a key part of that—increasing federal and investment in housing is critical, given the billions of dollars that American cities need to address this problem—but there’s also an opportunity to really spread a message that sets the pace for local and state governments everywhere. You can’t underestimate how important it is for Representatives and Senators to speak up on housing issues, to really spread a message that shapes the whole conversation nationwide. People like Elizabeth Warren and Alexandria Ocasio-Cortez prove that. So right now, the best thing I can do is help other candidates who are trying to change politics here in Texas, and get ready to serve my new district, which now goes all the way down to San Antonio, another place that’s struggling with housing. Oh, and I have to plan my wedding! We’ll be living and working in DC as well as Austin, so in two of America’s most expensive cities. I’m still trying to figure out the housing situation in Washington. Thinking maybe we should split a basement with somebody.

This post has been updated to more accurately reflect Casar’s political leanings and background.

Patrick Tighe Believes the Future of Los Angeles Is Affordable

Ludwig Wilsdorff Model How to Spend It 2022 Editorial

Splurge or Save Small Outdoor Accessories

A Fragrance Guru’s Guide to Creating a Home That Looks, Feels, and Smells Good

This Revamped Seattle Midcentury Is a "Riff on the Original Melody"

How Much of a Home Is ‘Harry’s House’?