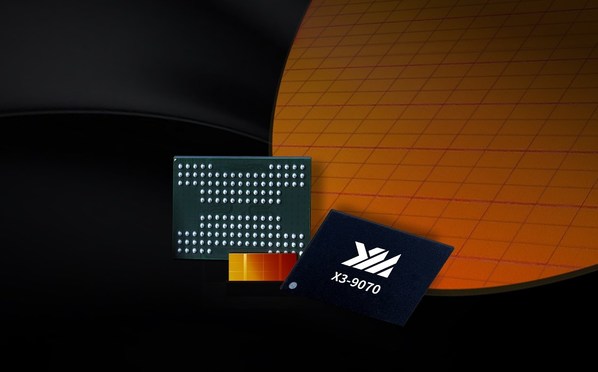 China-based Yangtze Memory Technologies (YMTC) has announced the latest iteration of its Xtacking NAND technology (now in its third generation), ushering in a new era of speed, density, and improved power efficiency. According to the company, its latest NAND chips (X3-9070) improve performance by 50% over previous designs (based on its 128-layer Xtacking 2.0 tech), while doubling density to 1TB per chip. Paired with a 25% reduction in power consumption despite the improved speed, it seems that Apple might find even more reasons to adopt the company’s tech.

“The advent of YMTC’s self-developed Silicon Stack 3.0 architecture is an important breakthrough in the 3D NAND track,” said Gregory Wong, founder and chief analyst of Forward Insights. “It has been proven that the hybrid bonding of storage arrays and peripheral logic circuits is essential to drive the development and innovation of 3D NAND technology.”

Interestingly, YMTC doesn’t yet seem to have deployed its 196-layer NAND design with the announcement of the X3-9070 NAND chips. The company’s next-generation NAND tech was slated to enter production sometime in the second half of this year, but any references to it in volume production are still absent. It may be that the company encountered difficulties in the transition, or perhaps it’s just a case of it adopting a tick-tock like manufacturing and research process — first figuring out the new 6-plane design, improving yields, with a later introduction of their new layer density.

Despite its technological advancements, YMTC is still trailing Micron and other NAND manufacturers around the world. Micron has announced volume production of its 232-layer NAND tech for later this year, with some impressive density and performance characteristics, while SK Hynix is hot off our own presses with its 238-layer designs. YMTC’s battle continues to be an uphill one, but it’s impressive what the company has achieved while fielding only two 300mm wafer fabs for its actual production runs. The company will have to scale further in order to capture any sizable market share, but it seems its R&D investments have been paying off – despite continuing US pressure — the latest of which specifically addresses NAND technologies.

China specifically possesses one of the biggest addressable markets across the globe, and companies worldwide look at it — and the potential earnings — with a certain twinkle in their eyes. The increasing pressure on China’s technology imports imposed by the United States has led the country’s leadership — and its companies — to focus on developing domestic technology that is able to not only serve its market, but the various billion-dollar tech markets. NAND is but a slice of it — but a significant one, valued at $66.52 billion in 2021 (expected to reach $94.24 billion in value by 2027).

How To Make A Raspberry Pi Pico W Web Server